Sisyphus and the Water Concern by Lorraine Beaulieu

Sisyphus and the Water Concern
by Lorraine Beaulieu

The sphere of Sisyphus, made of 1500 bottles of water, created by Lorraine Beaulieu during the summer of 2014 in the island of Hydra, in the space above the cistern of a traditional Hydra house. On September 6, 2014 took place the first part of the performance. The sphere rolled to the streets of the island, accepted the first autumn rain at the port, loaded on a ship and passed the Saronic Gulf to arrive at the Riverside of the Ilissos next to the Temple of Olympian Zeus.

From there on September 9, 2014 began the second part of the performance and the sphere once rolled in the streets of Athens, just beneath the Acropolis, joined Ask the Flask exhibition in Technohoros gallery.

A year later, on June 12, 2015 took place the third and final part of the performance. With the help of the public and the children Lorraine Beaulieu rolled away the ball and place it in the open ground Skironion Museum Polichronopoulos, which will now be hosted permanently, alongside olives and artworks.

With her performance and the sphere-sculpture made from empty water bottles which rolled in the streets of Hydra and Athens, Lorraine Beaulieu refers not only to the ancient Greek myth of Sisyphus, but also wishes to share with the public her desire to refuse to accept death and the absurdity of our world.

Cultural identity and man’s relation with his environment has inspired Lorraine Beaulieu. She uses very common material mainly from recycling and creates her work so that she can produce digital images, installations, sculptures and participative interventions. 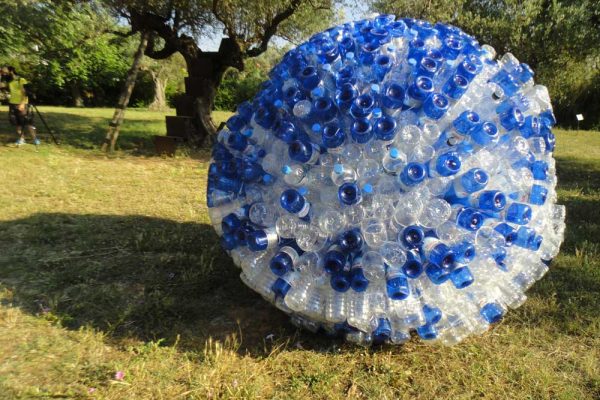