Chronicle of Ask the flask

The international online workshop “Ask the Flask” , which mainly deals with the issue of water scarcity, was completed from October 2013 to March 2014 with the participation of students in primary, secondary and tertiary schools ( university), who came from countries facing a severe problem of water scarcity as well as countries with adequate water supply.  Groups from Brazil, Canada, Colombia, Egypt, Greece (5), Iraq, Kenya (2), and the United Kingdom participated in the workshop.

The flask is the object-symbol of the preservation of life under the difficult conditions of drought. For this reason it was chosen as a title, symbol and trademark of this workshop.  Considering the way the planetary environment is currently formed, it is well understood that people of the younger generations are those who will trod this difficult path as they will receive a planet at risk and will have to fight against the climatic changes, the overheating of the planet, desertification, the pollution of the aquifers, the privatisation of water, and interests of various multinational companies.

Our “moto” was: Become an artist and through your work save our water

The teams were divided according to their level of education, in pairs of two. Every team from an area facing a water scarcity problem cooperated with a respective team from an area with adequate water supply. the Educational Supervisor, meaning the teacher or professor, in cooperation with one (or two ) Supervisor Artist coordinated the communication, research, cooperation and in general provided every kind of assistance required  to the students so as to realise the project. The coordination of all the supervisor artists and the educational supervisors was conducted by the project manager in cooperation with me.

The communication between the teams was carried out mainly via group conversations on Skype and the Facebook page ‘Ask the Flask’ which also served as an auxiliary media of communication and posting. Via Skype the students/scholars discussed and exchanged opinions concerning their relationship with water in their daily life and how its lack or adequacy affects their life. They entered different realms of reality, one team learning from the experience of the other and researching this fact on an international level, thus getting a general idea of the whole issue.  They presented their thoughts, ways of research, materials and methods of development and in the end every team created a work of art. The final works of art were displayed on the school / university premises or another place accessible to the public. Display venues could generally be town squares, the Town Hall, streets, galleries, etc

We believe that our main purpose was achieved, which was to have young people living in societies with abundant water supply communicate directly with young people from areas facing a water scarcity problem. It helped both of them gain a very positive experience, to fully comprehend the problem, to gain knowledge and to set a common target. Our aim for them was through art to feel the union and friendship having as a common element that of water and to also pose questions and formulate their own opinion. We wanted them to feel allies and not opponents, all residents of our planetary neighbourhood, who all have to drink out of the same flask in order to be able to trod this difficult path together.

We tried to give the opportunity to young people living in countries with an abundance of water (or what seems to be an abundance of water ) to get to know more about what they up to today saw only in documentaries ; which means to have their own direct personal, human contact with those who really live and face daily the problem of water scarcity. It was a chance for them to see, hear them, and know that they have a name, face, country, school, and teacher. It was a chance for them to build a personal relationship with them because it is a fact that personal relationships generate real interest. On the other hand, our other target was for the young people living in countries with a water scarcity issue to realise and understand that they are not alone in this struggle for survival. It was important for them to know that they themselves contributed to informing and motivating their peers. Also, that they contributed to the realisation by all that the problem of water scarcity concerns every person on this planet. They also motivated their peers to make it a part of their daily life to economise on water and not waste it , while at the same time they gave them a reason to speculate and look into the causes of the water crisis. They were made to realise that there is hope and that is why they undertook the role of citizens – guardians of water.

According to what the educational supervisors reported, the live contact between the children and their peers from other countries greatly increased their interest in lessons concerning the environment. They became more sensitive to the management of water use and conveyed this interest to their homes. Parents reported that the children would very often indicate ways to save water at home and would insist that their parents follow their instructions. Both students and scholars showed that they were especially attracted by the fact that their work was presented on the online platform of Waterwheel http://water-wheel.net/. In this platform concerning water, more than 200 people from 5 continents presented the latest developments of their job related to the water issue from 17 to 23 March 2014. Scientists, activists, artists, TED speakers, communities, young adults and children interacted with the audience from online portals in Argentina, Australia, Colombia, France, Germany, Greece, Israel, Marocco, New Zealand, Poland, United States of America, Taiwan and Tunisia.

The “Ask the Flask” was an experimental procedure, which with my partners we started with great enthusiasm and also great anxiety. We had no such previous experience and we had to coordinate from a distance many people of various ages from the whole planet, who reside under totally different conditions, come from different cultures and have different perceptions and experiences. We faced numerous problems some of which were recorded on the material collected and transferred to the exhibition. One of the most serious and sometimes even insurmountable problem was the sometimes bad, sometimes interrupted, or other times even impossible connection with Skype. Moreover, the time difference created a great problem to the students’ schedule, but we managed to solve that problem, too. The different cultures and the various cultural codes sometimes created confusion and difficulty in communication leading to bad quality communication. Last of all, the demon of digital media struck some of the participants by destroying a small part of their recordings.

I would like to thank with all my heart the 220 participants of the workshop, the educational supervisors and all the students and scholars who worked and presented their work. I especially would like to thank the project manager Despina Economopoulou and the supervisor artists Eugene Ankomah, Lorraine Beaulieu, Dimitra Siaterli and Katerina Fanouraki who were not only of invaluable help throughout the whole workshop but also participate in this exhibition with their own work on water. Last but not least, I would like to thank Professor Philippe Boissonnet for being here and the speech he delivered. 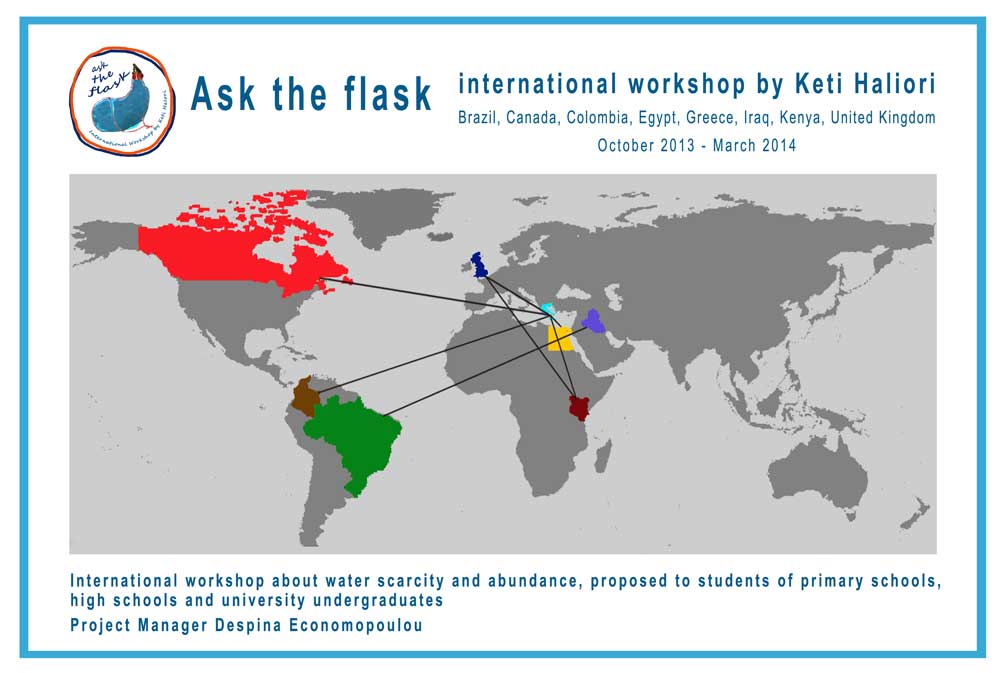 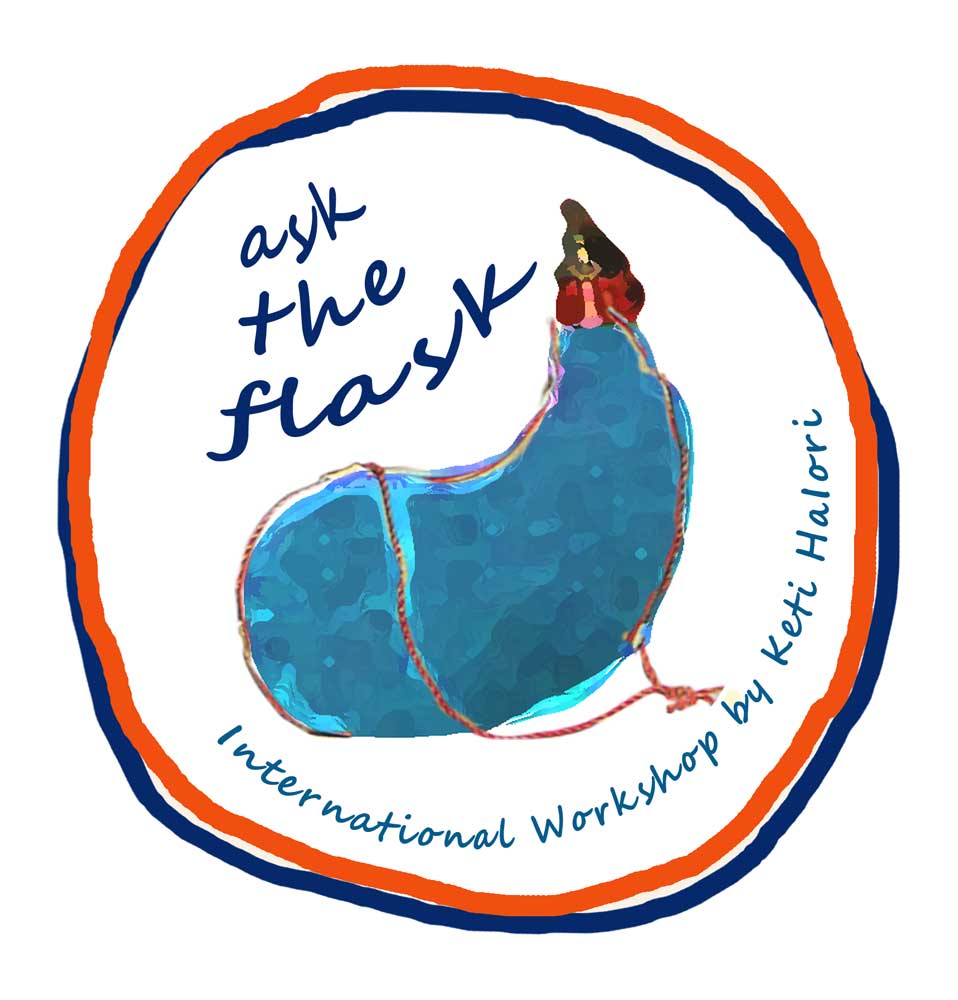 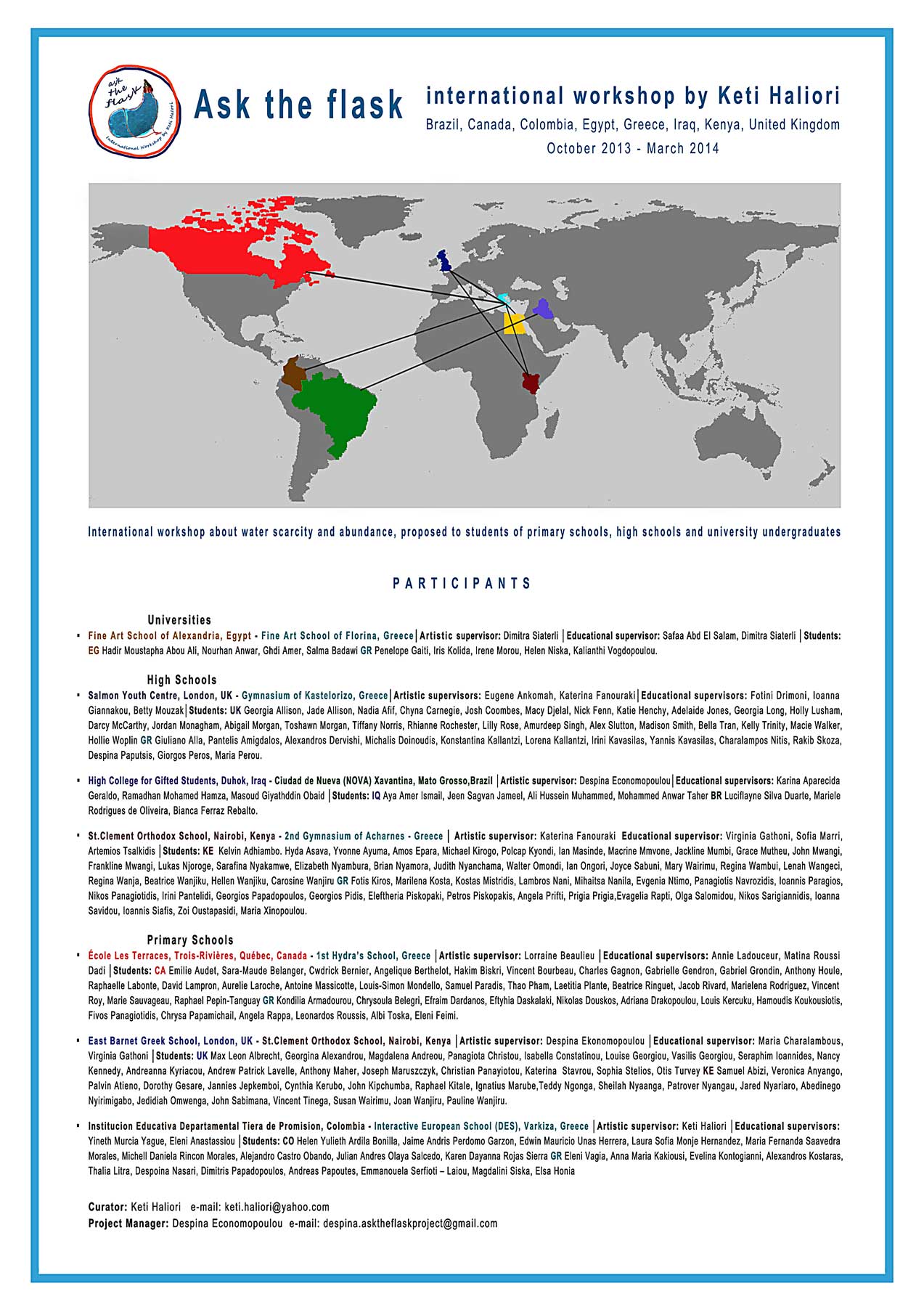