Thousands of years ago, through the wondrous process of the evolution of the human brain, rose the most fascinating and impressive epiphany of the phenomenon of life: human intelligence. The ability to systematically observe empirical phenomena, complex social structures, the development of speech, imagination, interacted and united in order to create the first cultural “sparks” of humanity. The first minds thought and devised while the first hands labored and created the blessed nuggets of rudimentary art, science and technology. Since then, art and science have constituted global values and have accompanied man in his historic course towards evolution.

Art served the need of man to familiarize himself with the unknown, to interpret his existential questions and quests, to become a creator and propagate his own experiences from life. The first samples of art (fig.1.1), which are likely to be connected with religious events and sorcery ceremonies, appeared during prehistoric times. Prehistoric people used pigments which came from minerals of the region, resins and other material, as well as carving tools.

With the passage of time, besides the religious and worship sentiment, art served the policy of displaying the authority and wealth of the rulers, but also to the aesthetic quality and eminence of beauty. The scientific and technological achievements substantiated the creation of works, which until this day have remained admirable and monumental (fig. 1.2). However, art was considered a joint product of human labor and of the distinct techniques, which may have been more sophisticated, but did not differ significantly from those of the craftsman. For this reason, during the centuries, artists were not essentially divided into craftsmen and manual workers. They worked in groups in laboratories, whereas in medieval times, they organized professional guilds. 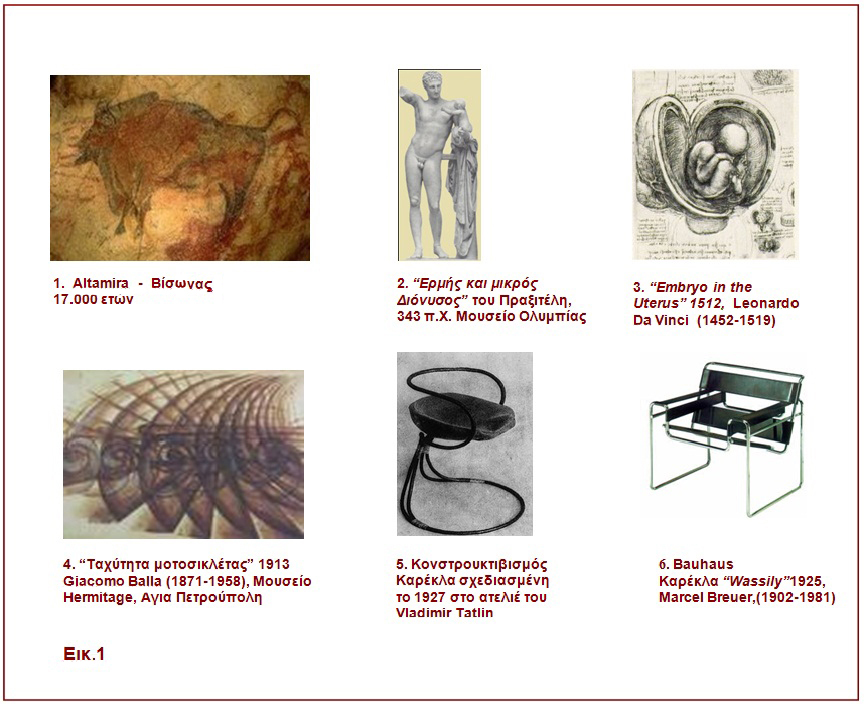 During the Renaissance, the special circumstances which prevailed in Europe led to the abandonment of collective work of workshops and required that the artist invent original “creative concepts”, become inventive, express ideals and create unique works. This new role also required the enrichment of knowledge and of scientific training. The artist, apart from being painter and sculptor, was architect, mathematician, surveyor, engineer, anatomist, inventor, philosopher, scholar, etc.

Lorenzo Ghiberti, Leon Battista Alberti and Leonardo da Vinci (fig.1.3) passionately argued that it was not only beneficial for artists to have theoretical knowledge, but they also had to be familiar with all liberal arts. An early form of interdisciplinarity, focusing on individual personalities, appeared in art. However, the intellectual artist, from the Renaissance and thereafter was supported and lived off the system of sponsorship and patronage of the church, kings, sovereigns and nobles, a system which later ceased to exist.

The volume of new scientific knowledge, technological discoveries and the array of social, political and economic transformations led to the industrial revolution (1780), during which, for the first time in the history of mankind, the shackles of the productive power of human societies were broken and the continuous, rapid proliferation of goods and services could be achieved. The industrial revolution resulted in the urbanization of the 19th century and the emergence of the gap between exact sciences and fundamental sciences. The artist was led to a dead end and the image established in the public’s conscience was that of a melancholic, hermetic creator. Until the 19th century, art was enjoyed only by the few powerful and privileged, who used it as a tool for formulating perception, strength and authority. The artist was essentially cut off from real life and everyday people and found himself in luxurious chambers and parlours of the privileged. He expressed himself through mimicry and produced “artwork” with substance based on the sensory experience of plasticity, form, the criteria of taste and views on beauty. Their value was always accounted for in small or large financial amounts of their era.

Marcel Duchamp followed in the 20th century and was the first who contested the operation of a physical object as a work of art and removed it from its pedestal. He believed that it was impossible to preserve the true things of an era and that it was against nature to store them in museums. The 20th century, especially, was accompanied by new social, economic, political and other changes and was characterized by the rapid development of science and technology. The technological revolution replaced the industrial revolution and the effects of accumulated scientific knowledge, which had grown exponentially, overturned every expectation they had in the areas of their applications. Predominantly, the sciences of physics, psychology and philosophy influenced the artists of the era, significantly. Particularly through the movement of futurism (fig. 1.4) the new industrial age, machine and technology, speed and the frenetic dynamism of factories were glorified.

A second interdisciplinary attempt appeared with the Constructivism and Bauhaus movements. Constructivism, serving the Soviet revolution, proposed the collaboration of artists, designers and craftsmen for the purpose of creating works of applied art (fig. 1.5). Whilst at the Bauhaus, masters of various disciplines collaborated with the artists in a fair and creative work platform (fig. 1.6). Architects, painters, sculptors, designers, weavers, printers, engravers, carpenters, potters, etc., worked together in a joint effort, for the “universal artwork” envisioned by Walter Gropius.

By the mid-20th century, the gap between the Sciences and Humanities had widened further. The movement Fluxus, which was developed in the 60’s and sought to bridge the gap between life and art (fig. 2.7), managed to approach the new technologies, again. Beginning with the actions of Fluxus and thereafter, a joint course for art and science appears again.

Art has always reflected society in which it was created. The current era is convulsed by historic upheavals in technology, social structures and life sciences. With the dawning of new technologies and the digital age, the burgeoning field of information technology and the barrage of discoveries make obvious the demolishing of barriers and the abolition of the boundaries between the sciences and art. On the contrary, it leads to the creation of communication channels, convergence and collaboration among them. Nowadays, it is logical that new techniques, new media, modern ideas and modern technological advances lead to new proposals in art. Artists propose innovations and lead our awareness to paths other than those which have been followed until now. They propose projects with philosophical references, conceptual and semantic labels.

New technological means such as video (important artistic medium of expression from the ’70s), digital media, space technology, holograms, modelling, genetics, laser rays, networks and the internet, tele-presence, artificial intelligence, artificial life, robotics, nanotechnology, etc. offer an exciting field of action and creation. Consequently, all things we have known until now regarding art and the artist himself, who have abandoned the romantic, mythical image of loneliness and chosen team creation, have changed.